The Disciples of Jesus Covenant Community began in October 1979, and, on 1 September 1994, amalgamated with Hephzibah Covenant Community which began in February 1982. The amalgamated Community, which retained the name Disciples of Jesus, currently has branches in Canberra, Cairns, Sydney (North, South and Mountains), Melbourne, Perth, Adelaide, Hobart, Darwin, Wollongong, Denpasar (Bali), Manila (Philippines), and Port Moresby and Mount Hagan in PNG. It now numbers about 1100 men, women and children. Since the early 1980’s the Community has been affiliated with other covenant communities throughout the world, and is a member of the Catholic Charismatic Renewal International Service (CHARIS) which is recognised as a private association of the Christian faithful of Pontifical right.

The Sydney North Branch was the first of the Disciples of Jesus Covenant Community Branches and for some time was the heart of the Community. It commenced on the 21st of October 1979 initially meeting in Pymble. After some months the community gatherings moved to the Parish Hall at Waitara close to where a number of community members lived. Since then the branch has met in several locations including North Ryde, Rydalmere, Baulkham Hills and their current gathering location in North Rocks.

In the early years the community’s vision was concentrated on working to serve the Church in Sydney. The focus was, from the earliest days, on evangelisation. Sydney-wide Rallies were held, and these attracted large crowds at venues such as football stadiums. On occasions, 10 metre banners were strung up on the approaches to the Sydney Harbour Bridge and other strategic locations to advertise the events.

Our way of life in Disciples of Jesus (DOJ) Sydney North aims to build a Christian community culture. We make a commitment to each other to live a Christian life together. We meet regularly for Sunday worship, fortnightly sharing groups and monthly celebration meals. We also work on our spiritual life through personal daily prayer, meeting a mentor (called a ‘discipler’) and supporting each other through pastoral care. We outreach to others through Summer Schools of Evangelisation (SSE) and local events and we support the Youth Mission Team (YMT), Light to the Nations (LTTN) and Disciples School of Mission which are national works of the DOJ. We give to the broader community through Have-a-Go charity and personal giving. We seek to serve the Catholic Church through supporting the Missionaries of God’s Love (MGL) priests, brothers and consecrated sisters, and serve in local parishes and dioceses according to each person’s capacity.

Members of the Disciples of Jesus eventually make a life-long commitment to live together a covenant reflecting God’s promise and love for His people.

Our Sunday Gathering is a time of communal praise and worship, listening to a talk and fellowship. This time is like the engine that drives the rest of the community. In coming and worshiping as a body we are drawn into the reality of God in our lives and we are empowered to go out into mission. This time is a sacrifice of love for God, for our brothers and sisters in community but also for the Church and the world. Without the community praying as a body, the rest of what we do would not be possible. It is a mysterious reality but the fruit of the Community comes from this reality.

The Sydney North Branch is led by Tomas Lara assisted by his wife Epay Lara.

The Branch Council supports the Leader with the vision, leadership, pastoral care and general
administration for the Branch. Council members serve a three-year term, which is renewable. In addition to Tomas, the current members of the Branch Council are Sulyn Leslie, Matt Leslie, Chris Cantrall and Kat Stone.

The Disciples of Jesus Covenant Community had statutes accepted by the Archbishop of Canberra and Goulburn on 24 February 2012. 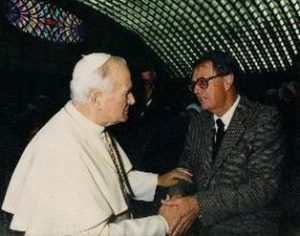 One of the common elements of our lifestyle is Sharing Group. These are normally single sex groups of about 4-6 people that meet fortnightly. The purpose of sharing groups is to create an environment where we can grow in the life of the Spirit. When God created human beings, He created us in His image. He built into our very being his communal nature. God thus helps us build community so that we may live as we are made to be. He also calls us into community so that through the witness of our love for each other, other people will be able to see this love and know that God is real. God calls us to love, not in a theoretical way, but in a deep, transforming way. Sharing group is one of the ways that we learn to grow. We cannot witness to unity without people to support us on the journey, to love us, accept us and to help us grow to be the disciples that we are called to be. In sharing group we learn how to care for others. It is difficult in larger groups to get to know each person well. In sharing group there is a greater capacity to let needs be known and for the members to support each other. Sharing groups are places of encouragement where we are able to help others discover the best in themselves. They can be places of support, growing prayer and accountability. We also grow in love with each other in prayer by allowing the Lord to reveal his heart for each one of the sharing group members.

Pastoral care is one of the distinctive elements of Covenant Communities. The objective of discipleship is to help us grow to maturity in Christ, i.e. to become a disciple of Jesus. It is to be a source of strength and encouragement in our Christian Life. When a person joins the Community, they are assigned a ‘discipler’ who will help them achieve this goal. A discipler is there to assist the person’s growth in the Lord. We trust that the Lord will use this relationship to call each person on in their Christian life.

The Disciples of Jesus Covenant Community hosts “Celebration Meals” on selected Saturday evenings throughout the year. Saturday night, in Australian culture, has been a traditional night where families celebrate the end of the working week, by cooking a special dinner, going out for an evening’s entertainment, or inviting guests home. Therefore we found this night to be the most suitable for having Christian Fellowship meals.

Jesus, as a Jew, would have heard Joseph praying and blessing the bread and wine on the eve of the Sabbath. Mary, His Mother, also, like the Jewish women of her time, would have begun the celebration by the lighting and blessing of the Sabbath Light. As the first Christians were Jews, well founded in the Old Testament tradition, they made use of this form of blessing in their prayers and Sabbath Meal.

Celebration Meals are an opportunity for us to enjoy Christian Fellowship it in the context of prayer and faith, mindful of the manner in which Jesus would have given thanks, as we celebrate the first day of the week – the Lord’s Day.

Refer to the “Latest News and Events” section for details of the next Celebration Meal.